AJ’s Music Factory decided to make May “Beatles Month” to have an engaging, light-hearted theme during the hectic last month of the school year. When we started this adventure, I received a great deal of feedback from my students that went something like this:

Have you seen the video “Do Kids Know Beatles Songs? Classic. Kids’ reactions to “older things” always crack me up. Do yourself a favor and watch it. The kids often don’t realize how many Beatles songs have crossed their ears in their short lifetimes.

Did you know Smashmouth covered “Getting Better” for the movie “The Cat In The Hat?” Or did you know “Blackbird” is covered in “Boss Baby?” And did you know that Netflix has created an entire animation series called “Beat Bugs “with every episode focusing on a story centered around a Beatles song?

As one of the most influential bands of all time, I desperately wanted my students to at least know of The Beatles and be able to call out one (or two!) of their tunes. Little did I know that by the end of the this month 99% of my students reported either loving The Beatles or at least enjoyed learning about them.

Throughout the month students read kid-friendly articles about The Beatles, worked on Beatles crossword puzzles and word finds, listened and analyzed Beatles songs, and they thoroughly enjoyed watching Paul McCartney and James Cordon drive around Liverpool, England to see all the legendary sights on Carpool Karaoke.

“Wait, Paul McCartney is still alive?” Yes, yes he is.

Every single student was required to learn at least one Beatles song during May. Favorites of the studio were “Hey Jude,” “Ob-La-Di, Ob-La-Da” “Let It Be,” “Day Tripper,” and “Love Me Do,” to name a few.

But by far, the most enthusiasm surrounded “Yellow Submarine!” 5-year-old student Nolan took his love of this song to a new level learning all the lyrics. Incredible!

Vocal students worked on singing “outside the box” with ballads “Imagine” and “Let It Be.” Fostering the artistry of our students is of the utmost importance, and we work to find their truest self in their music.

Our final group lesson of the year brought on some serious “Beatlemania!” Bucket drumming guru Sammy Foster has created learning content for all levels of students centered around Beatles songs including “Imagine,” “Love Me Do,” and “Come Together.” Our students had a blast rhythmically coming together with mallets in hand and buckets-a-bangin’!

We also had a KAHOOT! competition on Beatles trivia, younger students created floating yellow submarines, and everyone finished off the lesson with a Beatles Photo Booth. How many photo props can one student get in their hand and strategically placed for the picture? The answer…a LOT!

So, after one month of Beatles exposure, AJ’s students now have an understanding and (most) have an admiration for The Beatles. If there is one thing undeniable, it is that The Beatles created music and a legacy that stand the test of time then, today and always. John, Paul, George and Ringo – thank you for making the world a better place by sharing your musical gifts. Our hope is that in some way, small or large, that we can all do the same. 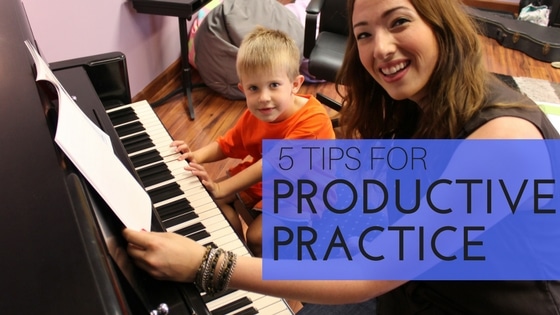 Good practice habits are crucial to the development of music students. Most other activities have practice built in with multiple hours of training per week. Learning a musical instrument is unique in that a majority of practice happens at home away from the teacher. Therefore, parents are asked to help facilitate the practice sessions.

Here are a few tips to help students have productive practice time at home.

1. SET ASIDE A SPECIFIC TIME TO PRACTICE

I recently asked a few of my most diligent practicing students, “How do you go about practicing each week?” I heard the following responses:

Notice that each student has a specific regimen they follow to ensure they practice their musical instrument. Be proactive about setting aside practice time each day.

Create a welcoming, clutter-free practice environment. Students practice space should be close to family and away from distractions.

I often get asked, “How much time should my child be practicing?” Instead of focusing on time constraints, I suggest we focus on goals for the practice session.

4. PARENT INVOLVEMENT IS KEY TO LEARNING

Students spend less than 1% of their week with me. We cram a great deal of learning into our short window of time, but I need help to ensure practice happens at home. How can parents help their child progress each week?

Some families choose to create practice incentives for their students. If they practice so many pieces, play for so many days in the month or pass through a certain book, they will receive a reward. This strategy has proven to work well especially with smaller children. Often families start with extrinsic motivation, but as students progress in their musical training and knowledge their intrinsic motivation takes over. They want to play a certain song they hear on the radio or they want to sound like their favorite musical artist. In later years of lessons students often long to become better musicians as it fills them with enjoyment, pride and self-confidence.

Remember that learning a musical instrument requires a parent/student/teacher triangle of communication and support to ensure the progress and success of lessons. Please reach out to your student’s instructor if you need any help, guidance or extra encouragement along the way. Practice definitely requires effort and attention, but observing the growth of your child’s musicianship is incredibly rewarding! 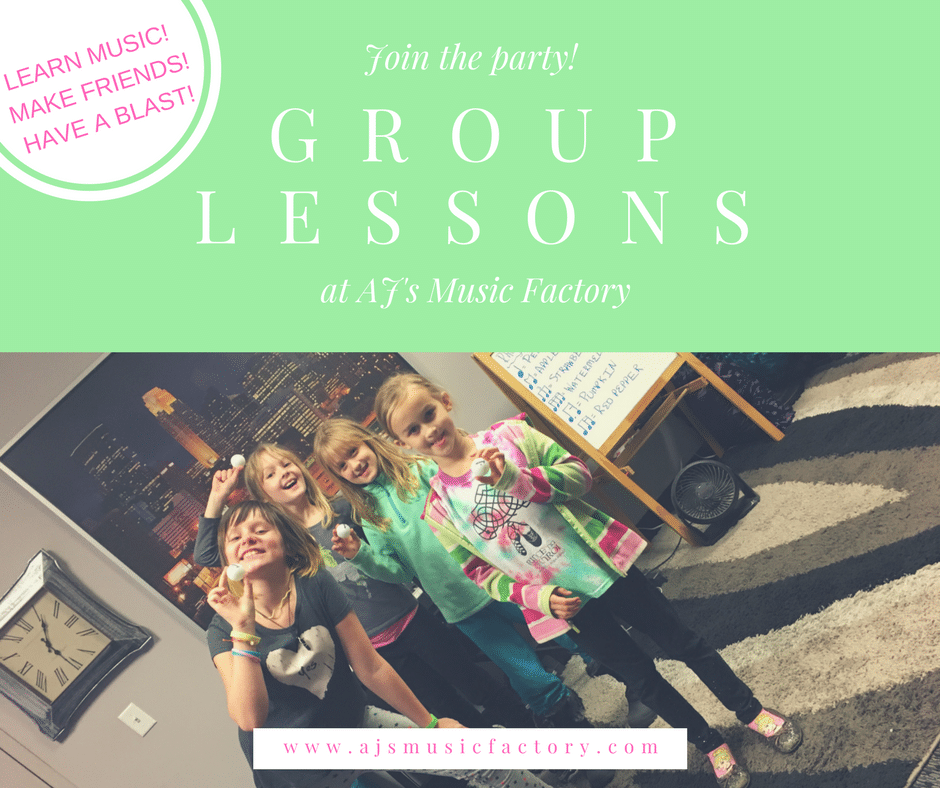 Energy was overflowing in our latest Group Lessons at AJ’s Music Factory! Piano and Vocal students built  major chords with help from our Ping Pong Chord Game, we learned about rhythms through Rhythm Produce infused with Rhythm Ladders and Rhythm Cups, and we even did the Sid Shuffle to get moving to the beat! Warning: If you hear this song, you won’t quit doing “The Mammy!”

Take a sneak peak into this week’s group lessons at AJ’s Music Factory: 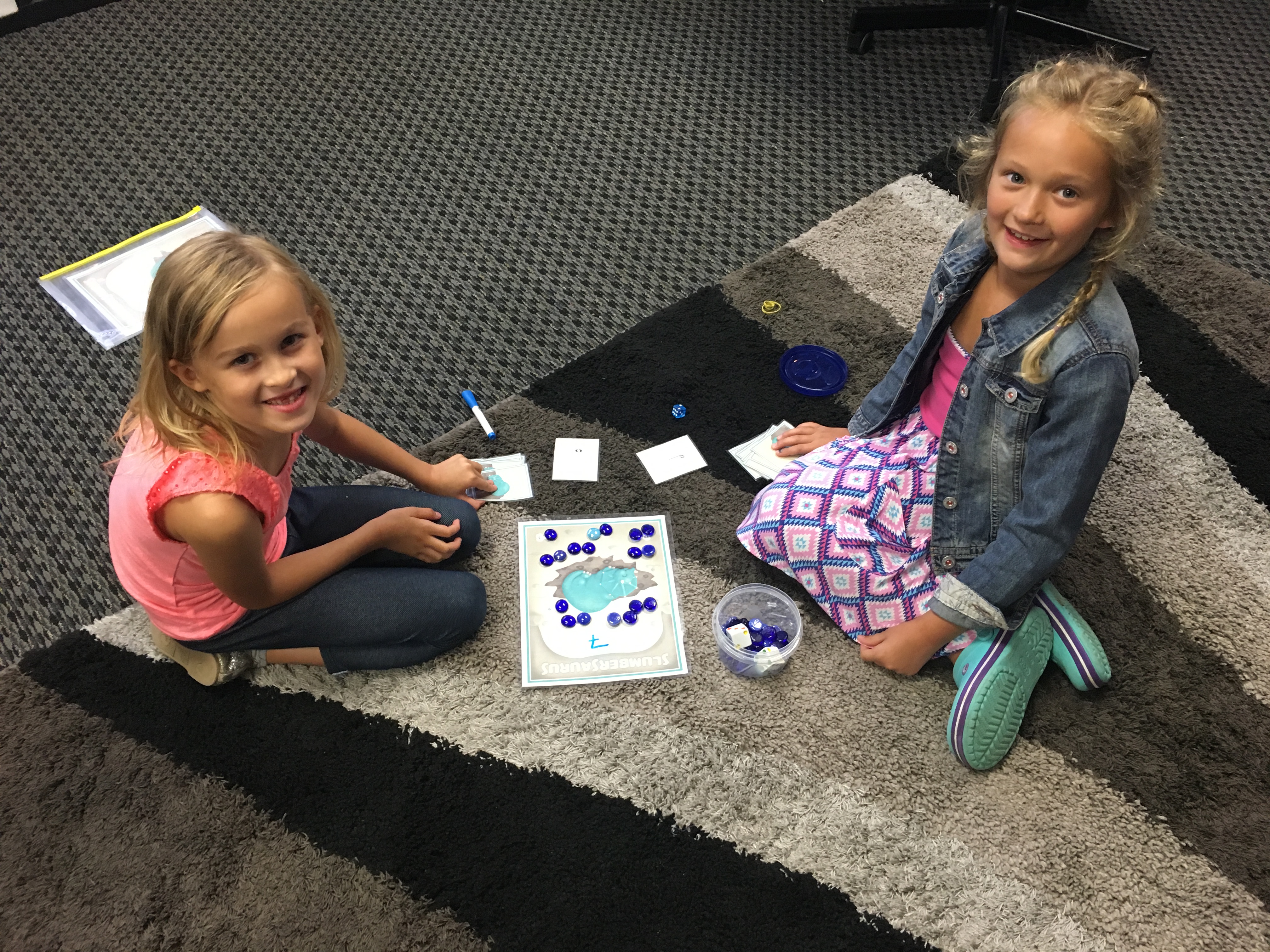 What are off-bench activities? We get this question a lot. Why? Because we are offering an exciting, 21st century approach to teaching lessons that is unique and new to music instruction.

The traditional way of piano lessons is that the teacher teaches a concept through songs, the the student goes home to practice, and then they return to show what they accomplished…and on to the next concept. Rinse and repeat.

That is not how we do things at AJ’s Music Factory.

Instead, students come in for lessons and after we learn new songs and concepts, students get to spend time using all of the technology, games, resources, and activities that are available in the studio. They are reviewing their music lesson in multiple domains: sensory, auditory, kinesthetic. Immediately students are using different off-bench ways to retain and review new concepts. And guess what? They are having FUN while learning!

Traditional lessons can also become quite lonely. Students frequently do off-bench activities together to give a sense of camaraderie within the studio. Seeing their lesson buddies becomes a highlight of the week!

Very few studios use a format like this, but this is why AJ’s Music Factory students tend to love their lessons. The days of “Do I have to go to music lessons?” have been replaced with “When do I get to go to music lessons?!” Our format supports students in their learning and brings fun and excitement into their lessons that is unique to our studio.

Take a look at a few examples of AJ’s Music Factory off-bench time:

Activities from “Rhythm: Make It Count!” Resource. Here we are feeling where different beats fall within a 4/4 time signature through balloons and tennis balls.

Feeling the beat with Bucket Drumming. We even glow in the dark from time to time!

We often review concepts through game-play. Here we combine note names, durations and mathematics in SLUMBERSAURUS!

Want to experience the new generation of music lessons? Contact us at andrea@ajsmusicfactory.com or 612.275.1895.

Last week students of AJ’s Music Factory participated in GROUP LESSONS. Check out our GROUP LESSONS VIDEO HERE. Students learned rhythmic notation and patterns through the use of common candy names (e.g. Nerds = quarter notes, Snickers = 8th notes) and internalized these rhythms through bucket drumming and vocalization. We also honed our listening aural skills to figure out what rhythms were played and dictated them by laying out our different candies in our “measures” made out of Twizzler bar lines. Also featured in the lessons were Musical Bingo, Heads Up and even a glow-in-the-dark drum party (once it got dark out!)

Music learning, making friends, creating memories, gaining confidence and having fun were all achieved in our group lesson! To learn more on AJ’s Music Factory, check out www.ajsmusicfactory.com. 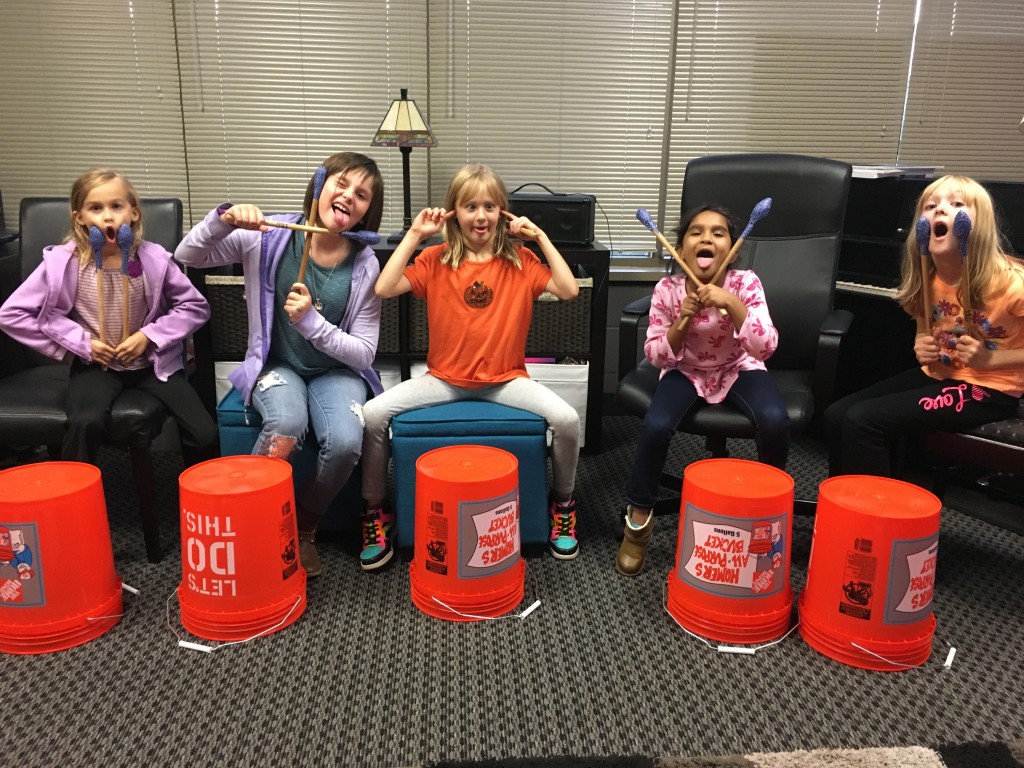 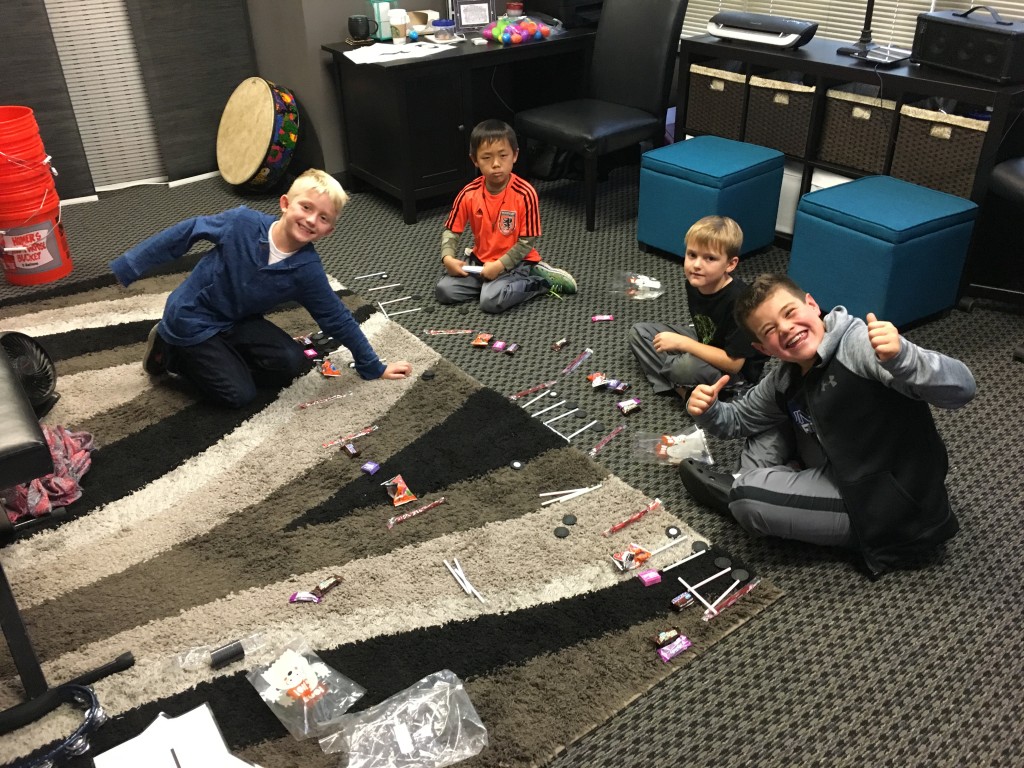 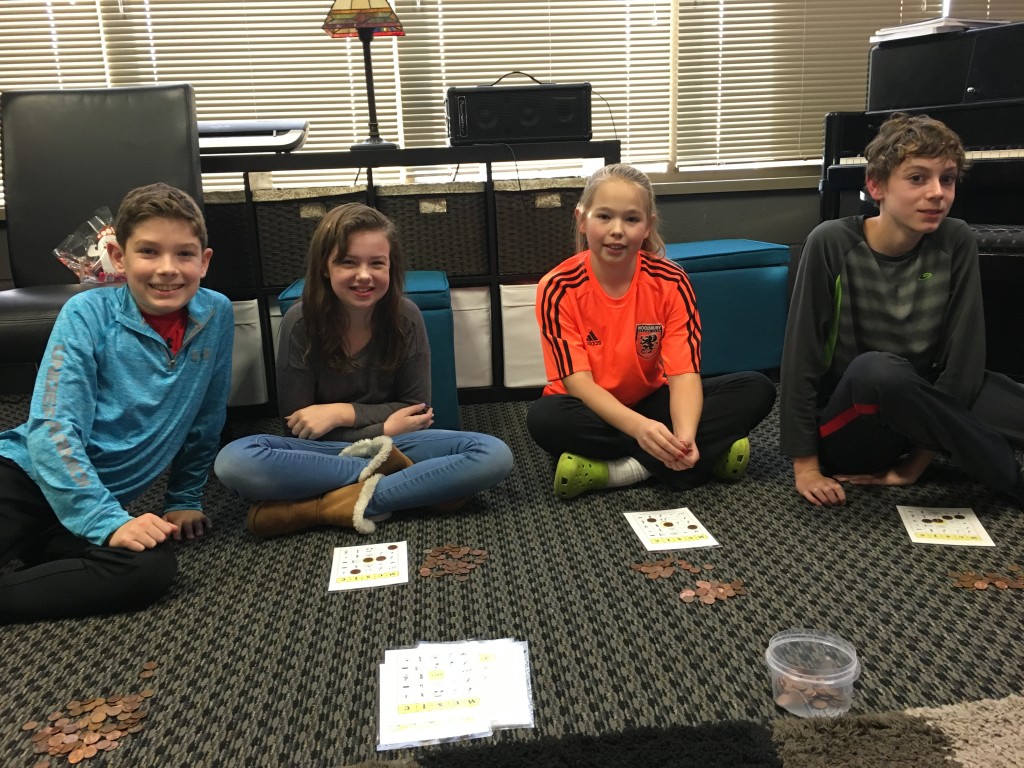 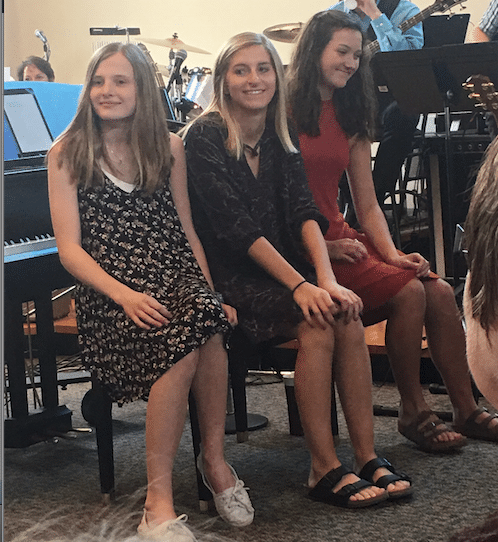 Thank you to all who came out to support our youth in our Shout for Joy concert! Students loved having the opportunity to sing with a full live band and perform for an attentive audience. Every performance that passes allows the growth of confidence in our students…confidence as performers and confidence as they navigate their way through their years of youth into young adulthood. The courage students call upon as they perform extends way beyond music, and we are so honored to encourage this kind of growth in our students. Below are a few moments from our showcase rehearsal and performance. Enjoy!

SINGIN’ IN THE RAIN 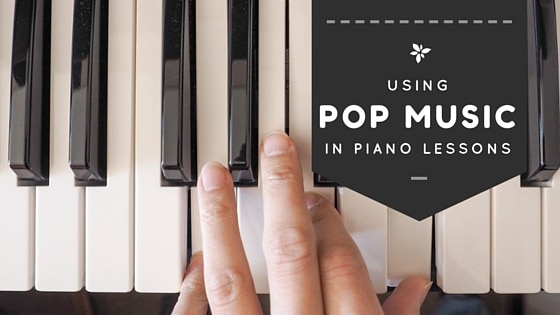 This is Grace. Grace is an 8th grader that loves current pop music. Her most recent request was to learn “Wildest Dreams” by Taylor Swift. We believe in meeting our students in the middle. Yes, you can play pop music, and how can we learn from this? Turns out, we can learn a GREAT DEAL!

Some concepts taught in the context of pop music include the following:

Grace’s playing grew quick momentum when we started learning her favorite pop tunes along with standard piano repertoire. Peek a student’s interest, and they will be more than excited to sit down and practice their piano lesson. 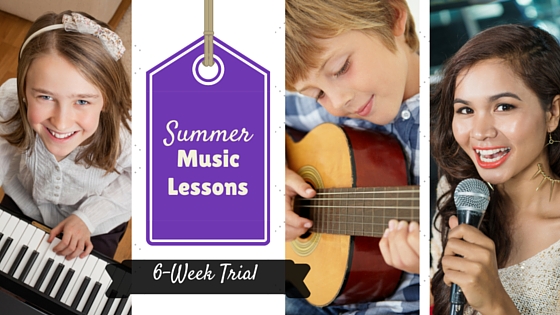 When? Summer session runs June 12th through August 5th. Choose 6 lesson times within this very flexible session that work for your summer schedule.

Why? Try an instrument on – see if it fits! This is a trial offer to allow your student to experience an instrument without a large commitment. Piano students do not need a piano at home to start up, though they will progress at a quicker pace if they have access to a piano/keyboard to practice. Guitar and Ukulele students will need their own instruments. Contact us if you need recommendations.

How Much? Tuition for this 6-week trial session is $175 which includes a start-up book and other lesson materials or music.

Where? AJ’s Music Factory is located inside Delmonico Dance Studios. We are to the left of “Posh Pooch.”

How? Click HERE to register for lessons. We will be in touch to solidify details. If you have any questions, please don’t hesitate to contact Andrea at andrea@ajsmusicfactory.com or 612.275.1895.

We look forward to meeting you and creating wonderful music together!